Note: All recordings on this page are of the North Texas Wind Symphony (conducted by Eugene Corporon), which is considered to be the "standard" of wind band performances.

This is perhaps one of the most well known movements of the piece.  It is a four verse, strophic folk song with a lot of repetition in the melody.  Grainger also adds counterpoint into the piece by interjecting a fanfare.  This fanfare is often overplayed and should not cover up the melody (Begian, 1992).
One thing that Grainger believed in was using English instead of traditional Italian in the music.  This often causes much confusion in the piece.  The first issue is with the tempo marking, where Grainger writes "Brisk, with plenty of lilt."  According to Appendix IV (translation of "Graingerisms") in the score, lilt means con spirito (Grainger, 2010).  Also in the footnotes by Frederick Fennell, he writes that this means that beats 1 and 4 are much heavier than beats 3 and 6 in this 6/8 movement.
There is another footnote in the full score saying that "Grainger expected [the string bass] with the extension to Low C.  This can cause problems for many bass players who do not own, and cannot play on a C extension.  Some people in the bass world also refuse to adjust to one since much of the literature performed in orchestral halls around the world does not require one.

This movement is a particularly beautiful version of a folk song.  Set in d-flat major with many chromatic notes, this again strophic movement requires time signature changes ever measure or two.  These time signatures however are mostly common ones including 5/4, 4/4, 3/2, and 2/4.  In fact, the time signature changes are what makes this movement standard for undergraduate conducting classes.
The tempo marking is something that is of concern.  Graingers official marking is Quarter note = 76, while Dr. Begian recalls Grainger conducting the piece closer to dotted quarter = 76 (Begian, 1992).  Also due to the overly slow tempo that many people take the movement at today, the grace notes at the end of the piece are commonly taken out of context and treated as pick-up notes.  The grace notes need to be treated like grace notes and provide a quick lift to the following note.
Also, an issue Dr. Begian recalls is the overall articulation.  Many people count the slurs too literal, when they need to be used more as phrase markings.  This produces the need for the dotted eighth-sixteenth notes to become even more articulated then usual (Begian, 1992).  Remember that these idea's comes from Grainger, who was a concert pianist turned composer!

This is one of the infamous movements that separates the "men from the boys" in the conducting world.  Just by looking at the first page of the score, you can see time signatures including 3/8, 4/8, 5/8, 3/4, and 2/4.  Grainger even had a hard time conducting this movement and would not take his eyes off his color coded condensed score.
One of the biggest debates in band music lies in this music as well.  The official tempo marking is Quarter note = 132, while it is claimed that this is an error on Graingers part, listed both in the appendix of the score (Fennell, 2010) as well as through Harry Begians time spent with Grainger (Begian, 1992).
There is also another debate about this movement which causes many band directors to avoid this movement when performing the piece, and that is the Version A vs. Version B argument.  Grainger wrote two versions of the beginning of this piece and stated "If you have a soprano saxophonist who can play the solo...LOUDLY, piercingly, feelingly, and vibratingly, use version B.  If not, this solo may be played on a Flugelhorn in which case use Version A" (Grainger, 2010).  After reading this in the score, and also knowing Graingers love for the saxophone, many conductors assume that Grainger prefered version B.  Going back to Dr. Begian, he said that both times he performed this piece with Grainger conducting, Grainger chose version A (Begian, 1992).

Form and Structure (Blocher et. al, 1997)
Verse 1 - A cannon, one measure apart in asymmetric meters
Verse 2 - Flugelhorn or Soprano Sax solo
Verse 3 - Where versions A and B come together.  Tutti and loud
Verse 4 - Tutti and soft
Verse 5 - Reprise of cannon with different orchestration

This movement provides a sigh of relief from the conductor, but not necessarily woodwind players.  In this movement, woodwind issues arise quite frequently.  After looking at the third verse, you may see why scales and arpeggios are an important part of a balanced diet.  The passage is riddled with sixteenth note sextuplets for eight measures.  This is the reason why many high school bands forgo performing this movement.  Also something to look out for is the balance during this woodwind whirlwind.  There is a baritone solo that is more important then woodwind fluff.
From a conducting standpoint, this piece is a simple three pattern that is not difficult to conduct.  The key is to keep the beat light and staccato, with accents on the beginning of each measure (Begian, 1992)

This is another infamous movement that causes many wind conductors to avoid this piece.  This was one of the first pieces (if not the first) to incorporate a free time section into this piece.  In the score, the instructions say "In the passages marked "Free Time"...the Bandleader should vary his note-lengths with that rhythmic elasticity so characteristics of many English folksingers...give free reign to his rhythmic fancy, just as folksingers do" (Grainger 2010).  This means absolutely nothing to many, so Grainger also gives examples of how the free time section should sound (Grainger, 2010).

One issues that Harry Begin brings up is that Grainger never followed his own directions during this movements (Begian, 1992).  However, Fennell has attempted to recreate what he heard Grainger sing one day (Fennell, 1980). 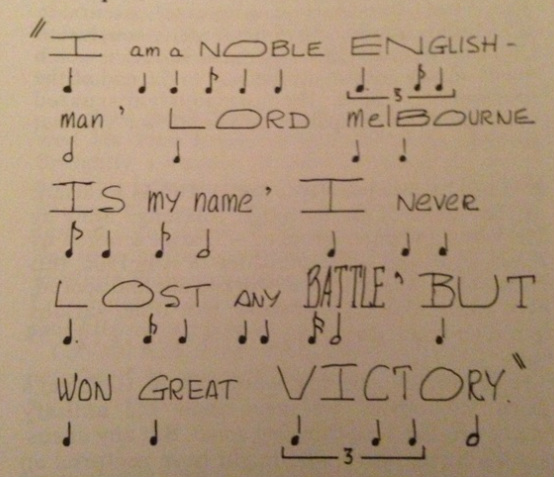 If you head over to the "Listening In" section of this website, you will be able to download a clip of Grainger performing this movement at a harmonium, allowing you to hear what he might have had in his mind.  I believe that is follows what is done in Fennell's transcription, but still gives a little bit of liberty for folksinger qualities.
Another reason many people are detered away from this movement is the very complicated meters found, including: 1/8, 2 (1/2)/4, 2/4, and 3/8 just to name a few.  The meter is always changing when it is not in a free time section.  This picture below shows how Fennell chooses to conduct measures 35-43 (Fennell, 1980)

This movement offers very little of a challenge to many groups.  The movement tempo is fast, and in 3/4.  Just by looking at the score, you see many accents on beat one at the beginning.  There should be a waltz like feel at the beginning with the conductor directing in one (Begian, 1992).  This movement follows the original folk song's repetitive scheme, but makes it exciting through the use of colorful orchestration.